Hi everyone, Having completed the first three lessons and feeling like I am making a lot of progress, I just signed up for a subscription. The community seems pretty quiet though - is there anyone else out there? I am just starting lesson 4 and it is starting to ramp up. I really feel I am achieving something though - I have tried on several previous occasions to learn Chinese characters but hit a brick wall. I have already progressed past the point I got to previously, so - yay for Pandanese! Is anyone else around the stage that I am at?

I’m glad you’re enjoying Pandanese, because I enjoy it too. It’s the only program I’ve used so far that’s helping me to consistently stick to learning Chinese.
Unfortunately the community is a bit quiet around here, and lately I haven’t been receiving any replies from support (email or chat).
I’m a bit further than where you are. Let’s keep on learning together!

The rejections of answers that seem to be aligned with acceptable answers is unfortunately getting more common from Lesson 7 onward - would you be able to fix these?: 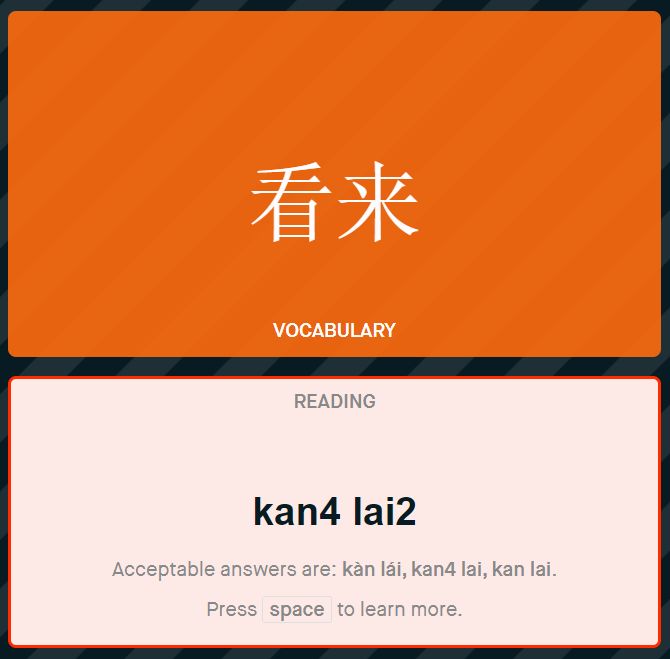 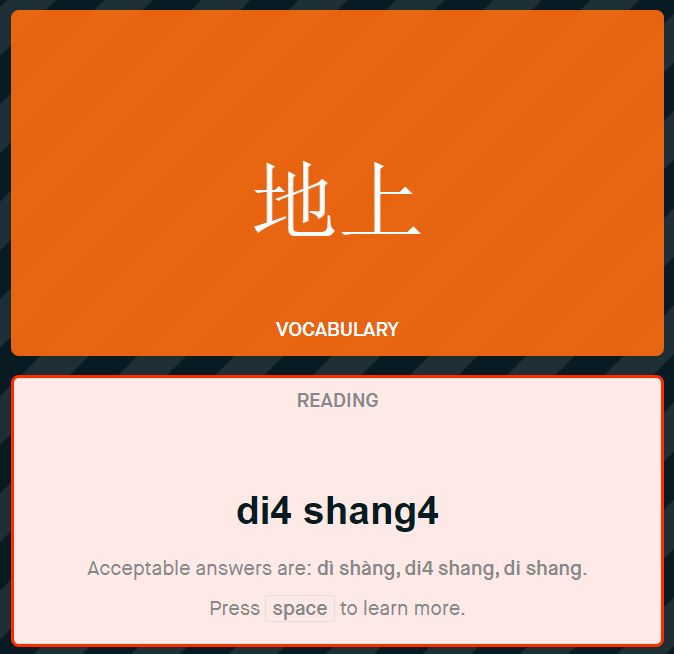 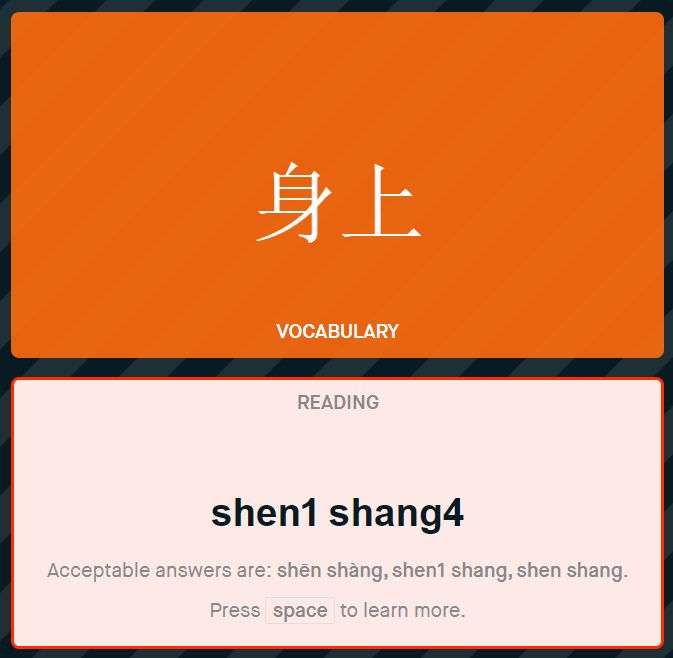 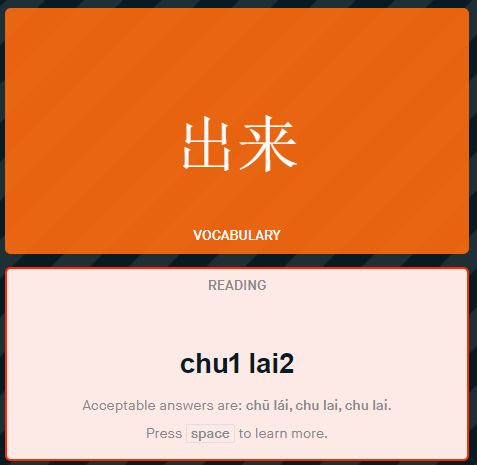 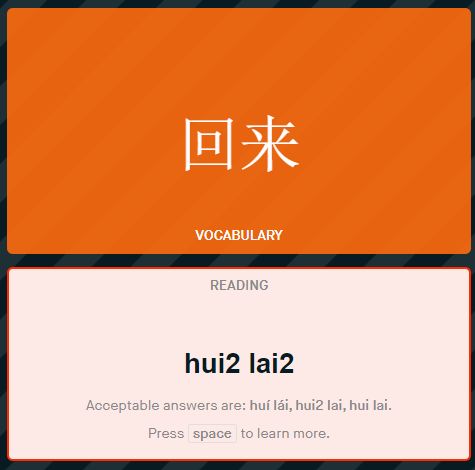 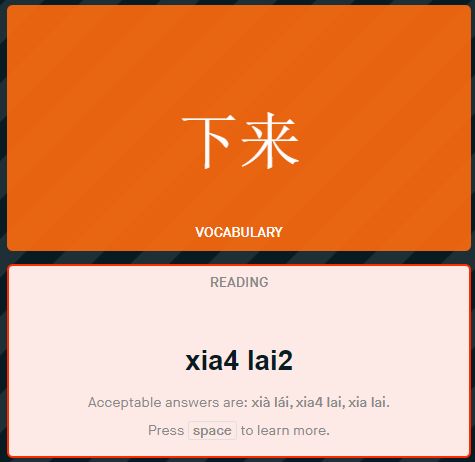 I suggest changing your “strictness” in settings. Hopefully it allows those words to pass.

That might help to allow these words to pass, however, it would also mean it will more easily pass any mistakes I make. This setting change is also not recommended by the Pandanese team:
“* Reading (Only enable this if you know what you’re doing… most readings are short so this will make lots of mistakes still acceptable as correct)”
The real issue is that not all acceptable answers are properly entered in the database for some words. This should be fixed by someone who has the right to edit database entries.

I agree. I’ve been trying to contact support for a while now to fix errors that I’ve picked up, but I haven’t heard back.

Same on my end - no response from them unfortunately.

I have just reached lesson 5 - yay! I also found that when I picked up one of my old Chinese books that I couldn’t read before, I could read a bit of it. Very satisfying!

Congratulations! I’m also looking through my old Chinese books, and realizing I’m slowly catching up to where I was before in my Chinese studies. 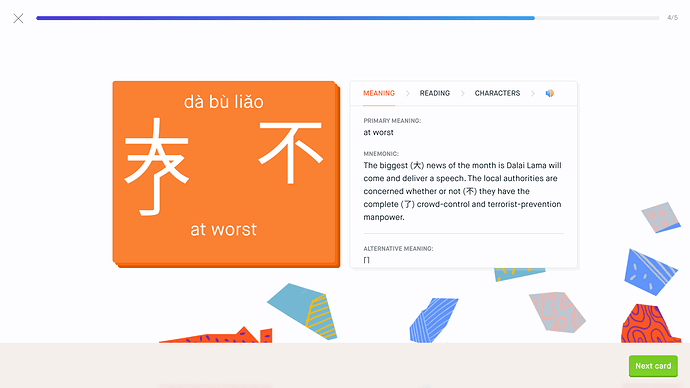 Hi. Here are some things that need to be improved:

Bottom line, these errors and inconsistencies are everywhere, it’s quite confusing and frustrating, and really I doubt it’s working as intended. The whole thing needs an overhaul; and I suggest (besides just fixing it, obviously) adding a feature to add both custom readings and meanings. That way, the users can just fix these obvious errors by themselves as they go through the lessons.

I second that!
Best to allow input from users as a note attached to be viewed, approved or deleted by a panel of experts. Some rival Apps has such self derived functions.

For 看来 if I put “kan lai” or “kanlai” or “kan4 lai2” or “kan4lai2” it is always marked as wrong. I encountered this issue with this during the lessons as well, and there are a few other terms (perhaps all lesson 8) that have this same issue of not being able to get any of the readings right. Please fix this, unless I’m typing it wrong? Haha 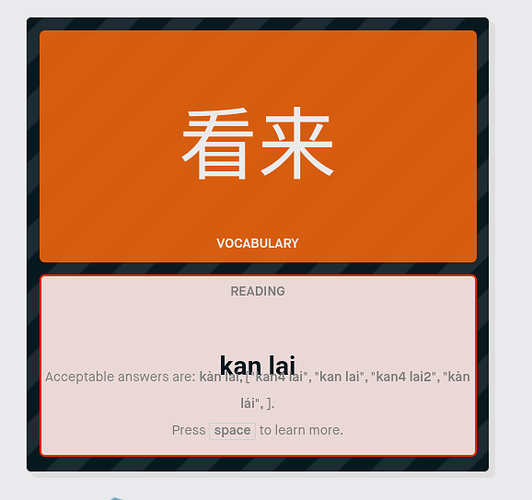 I’d just like to add that vocabularies with characters that have no accent are often inconsistent. The most egregious of these that I’ve found to date is 这边 (whose pinyin is zhe4bian1) and 那边 (whose pinyin is na4bian), where even though the 边 character is shared, the pinyin is different. I’ve also cross-referenced this with native speakers and multiple dictionaries to make sure that this is indeed incorrect and not some freak exception. I’ve sent error reports for most all of them I can find, but they don’t seem to get corrected. I think the main issue here is that the developer uses the MDBG Chinese Dictionary (https://www.mdbg.net/chinese/dictionary), which is often inconsistent with other dictionaries in terms of pinyin and that gets very confusing. The reason I’m guessing that dictionary specifically is that that’s the only dictionary where I can find pinyin consistent with the ones used in these cards (it’s also the first result when you google Chinese dictionary). Oh, also. A slightly rarer issue is with words that have multiple readings, and thus multiple definitions. The example I have off the top of my head is 重, which when read as zhong4 means heavy, but when read as chong2 means [something] duplicated, but in the card, only the latter definition is included. Thus, Nikolay or whichever developer reads this: please triangulate your pinyin and make sure your definitions cover homophones, or let us add custom entries because it often gets really annoying putting in a wrong answer just to get past a card.

As I’ve been using pandanese one thing I’m noticing is that you give a different name to radical mutations instead of explaining that they are simply mutations of a radical/character. I think that’s not a good idea, since it might confuse people when they are learning from other sources as well.

Before I learned and understood that ⻂ was just a different form of 衣 and meant “clothes”, I kept mistaking it and 礻, which is a different form of 示 and means spirit. Once I got through to understanding that, I finally stopped misplacing ⻂ and 礻 in words such as 神 (god is related to spirit, not to clothes), 衬衫 and 裙子 (which both are pieces of clothing and thus should use the clothes radical), so on and so forth…

While I agree that you could have different cards for different variations of the same radical, I think radical variations should still have the same name. After all, you never ask us to produce a radical (and thus we don’t have to worry about two variations with the same name)

I’m one lesson in and there’s already problems. When I’m being tested it shows me the character for eight. So I type “8”, and it tells me I’m wrong. I have to type e-i-g-h-t. Also it shows me 人 and I write “person” and it tells me I’m wrong. It says the correct answer is man. But person is the more accurate answer. 人 doesn’t just mean male people. I think you need to add more than one corrrect answer to your questions.

Hey, I’ve been looking for an app like Pandanese for a good while and this has a lot of potential to help people learn how to read chinese. But unfortunately, such as it is right now, I have to say that it might even be harmful to even use Pandanese as a beginner, which is the target audience you seem to be going for.

I’ll stop using Pandanese now since I know of SRS’ power to make you memorize stuff and I’d rather not drill in my head some of the unfortunate design decisions made by the Pandanese developers. I really hope you gather what you already have of feedback here and in the other posts in this forum and improve your app, it has great potential, but you still need to improve it a lot before asking people to put money into this.

One issue I haven’t mentioned yet, (from a intermediate learner’s POV), is that most of the mnemonics seem pretty useless, and learning while reading all the flash cards might be harder than just using the raw power of the human mind to memorize how they sound.

Sad to see that this app that seemed to be what I had been searching for to help me memorize the characters fails to deliver, but I’m hopeful you’ll be able to fix the issues and build enough a userbase so that your stakeholders allow the continuation of this project.

Best of luck to you, Pandanese developers!

I’ll say that I agree with pretty much all of what you have said! However, I have still found Pandanese to be useful at least specifically in the way I study. And, I would say that I am that target, beginner-audience. I am, essentially, at this point, only paying specifically for the SRS flashcards and structure of when I’m learning certain vocabulary and characters. I pretty much ignore all the pre-written mnemonics and such and only use my own methods of memorization. I use other apps and sites in addition to Pandanese. So I would say I still have found Pandanese extremely useful but only in a specific way and not as my sole method of learning. I could use something else like Anki, but I’ve found that Pandanese meets a lot of other requirements such as the interface and having the vocabulary already organized for you (rather than having to make your own list or find an appropriate one), etc.

I do hope that the developers of Pandanese can be a bit more interactive and open about what the specific plans and timeline is for the future of updates to Pandanese. Or even just about the state of Pandanese as it is currently (whether that’s about how much time they actually have to develop the app or if there’s likely not going to be any updates for the foreseeable future, etc.). I think just being open about the state of Pandanese would go a long way towards fostering a userbase that doesn’t feel like they are in the dark about what they are actually paying for.

Regardless, I am thankful for the existence of Pandanese and I hope that it can do something about improving itself, whether through communication or actual updates to the site. So far, it has definitely done wonders for my studies, it just could be better!